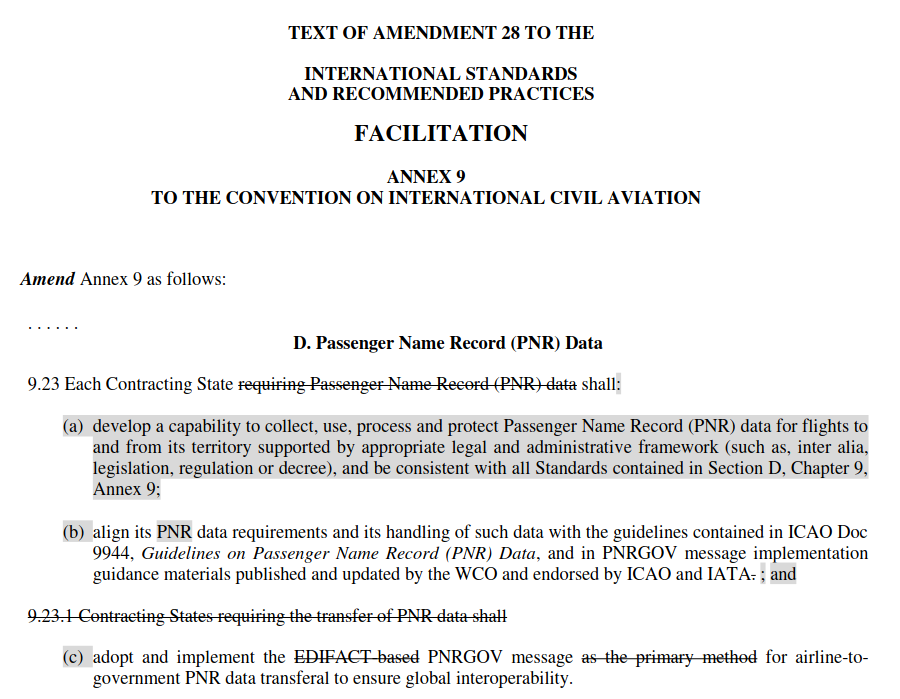 Playing out the endgame we predicted last year of a two-decade campaign by the US government to establish a global regime of government surveillance of air travelers, the International Civil Aviation Organization (ICAO) has adopted an amendment to the Chicago Convention on Civil Aviation that will require each of the 193 state parties to that treaty — essentially every national government in the world — to require all airlines operating international flights to provide a designated government agency with complete mirror copies of all reservation records (“Passenger Name Records“) in a standard PNRGOV transmission format.

This is an extraordinary and, so far as we can tell, unprecedented globalization and normalization of suspicionless mass surveillance of the innocent exercise of legal rights.

To the best of our knowledge, this is the first time that any industry — much less an industry of common carriers required by law (including by international aviation treaties) to transport all would-be passengers, without discrimination, in the exercise of a right to freedom of movement also recognized by international treaties — has been mandated by international treaty to provide government agencies worldwide with complete copies of its commercial records of each of its transactions with a customer. No such treaty obligation exists, for example, with respect to records of postal, telephone, Internet, or financial transactions.

The exercise of rights should not be deemed per se suspicious or a legitimate grounds for surveillance.

The requirement for PNR-based surveillance of air travelers is included in Amendment 28 to Annex 9 to the Chicago Convention. This amendment was approved by ICAO’s Council — an executive committee of countries elected by ICAO’s members to make decisions between ICAO’s triennial General Assembly of all member states — on June 23, 2020.