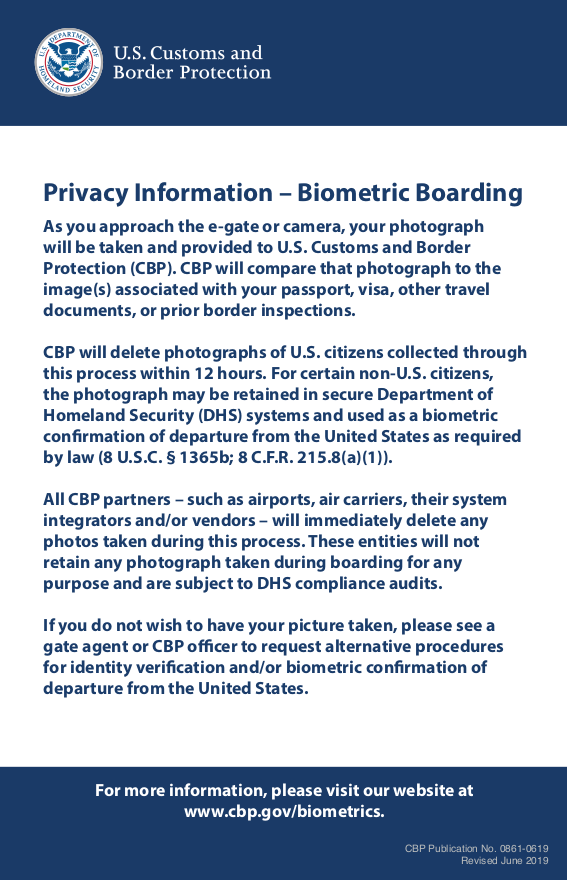 US Customs and Border Ptotection (CBP) has launched an entire new subdomain of its website, biometrics.cbp.gov, devoted to propaganda intended to persuade the traveling public to submit to, and airlines and airport operating authorities to collaborate in, the use of facial recognition and other biometrics to identify and track travelers.

There’s nothing in CBP’s happy-talk sales pitch for facial recognition on this new website that we haven’t seen before. And there are still no answers to any of the questions we’ve asked CBP officials about these practices and the legal basis (not) for them.

Biometrics.cbp.gov features links to the (nonbinding) Privacy Impact Assessments (PIAs) that are supposed to describe how mug shots obtained by CBP or its airport and airline “partners” are to be used. But the new CBP site doesn’t link to the legally binding System Of Records Notices (SORNs) that disclose a much wider range of routine and permitted uses of these images.

If there’s anything noteworthy on this site, it’s under the Resources tab, where you can download  copies of the official CBP signs that are supposedly posted at airports, seaports, and land border crossings, including those for airport arrivals (shown at the top of this blog post), airport departures, cruise ports, and pedestrian lanes at land borders.

Leaving aside questions of the accuracy of the claims on these signs, they provide definitive confirmation that all of these biometric programs are in flagrant violation of Federal law — as we’ve pointed out repeatedly to CBP, but to no avail.

Some people wonder why we care about OMB approval or PRA notices. OMB approval is often little more than a rubber stamp. It’s not an onerous burden on the agency, and it doesn’t usually involve any meaningful scrutiny of the legal basis claimed by an agency for collecting information from individuals. PRA notices don’t give much information about how the data that’s being collected will be used.  Few people know to look for PRA notices or OMB Control Numbers, how to interpret them, or what they signify.

The significance of CBP’s complete disregard for the PRA — a minimal administrative formality that CBP could easily comply with — is that it is indicative of CBP’s complete disregard for the law in general. It’s not that CBP or its parent agency the US Department of Homeland Security (DHS) are lazy. The choice not to seek OMB approval for their actions, or to post PRA notices, is not an accident. It’s emblematic of the extent to which CBP and the DHS assume that they can disregard any of the substantive or procedural rules that apply to all other agencies, and make their own laws through secret diktats. The real problem is not the violation of the PRA, but that CBP and DHS have no greater respect for human rights treaties or the US Constitution than they do for Federal laws like the PRA.