A class-action lawsuit filed this week in Pittsburgh by the Institute for Justice, Brown v. TSA, exposes the dirty non-secret that TSA checkpoints are used primarily as drug checkpoints  and as a revenue center for law enforcement agencies, not to protect aviation.

Warrantless, suspicionless dragnet administrative searches at TSA checkpoints are justified as measures to “screen” travelers for weapons, explosives, and other threats to aviation.

When the actions of TSA Transportation Security “Officers” are challenged in court, the TSA has claimed that its “Officers” are not the “officers” referred to in the Federal Tort Claims Act (“any officer of the United States who is empowered by law to execute searches, to seize evidence, or to make arrests for violations of Federal law”) ; conduct only limited administrative searches for weapons, explosives, and threats to aviation; do not have any authority to conduct searches for any other purpose; and neither have nor exercise authority to arrest or seize travelers.

In practice, however, the primary use of TSA checkpoints by the government is to “screen” travelers for drugs and cash, and to seize and expropriate illegal drugs, drug-related cash, and all “large” sums of cash being carried by airline passengers, regardless of the presence or absence of any evidence linking that cash to illegal drugs or any other illegal activity.

Ten years ago, when the TSA’s illegal practice of searching for and seizing cash at airport checkpoints was first challenged in court by the ACLU, the TSA initially tried to claim both that large sums of cash are per se suspicious and that TSA “Officers” have general law enforcement powers of detention, search, and interrogation.

But, perhaps realizing that searches for general law enforcement purposes would require probable cause and could subject the TSA and its “officers” to liability, the TSA changed its tune and issued new directives to TSA staff and contractors that “screening may not be conducted to detect evidence of crimes unrelated to transportation security” and that “traveling with large amounts of currency is not illegal.”

Unfortunately, although the government returned the cash seized in that case, the practice of searching for and confiscating travelers’ cash at TSA checkpoints has continued despite the nominal change in written instructions to checkpoint staff.

What’s long been needed is what has now been brought by the Institute for Justice: a class action seeking nationwide injunctive relief on behalf of all those who have been subjected to unconstitutional searches and seizures of their persons and effects, including their cash, at TSA checkpoints.

A series of oversight reports by the Department of Justice Office of the Inspector General (2015, 2016, 2017) has documented the systematic targeting of travelers for “asset forfeiture” to the government of their cash, especially at airports, even when no criminal investigation was conducted, nobody was ever charged with any alleged crime, and there was no articulable nexus between the cash and any suspected crime.

Overbroad airport searches and seizures are a key part of the problem of “asset forfeiture”, especially the “war on cash” being waged in the name of the “war on drugs”.

A sample of cases reviewed by the DoJ OIG for its latest report shows that more cash was seized and subjected to forfeiture to the government at airports than anywhere else, including on highways and at traffic stops: 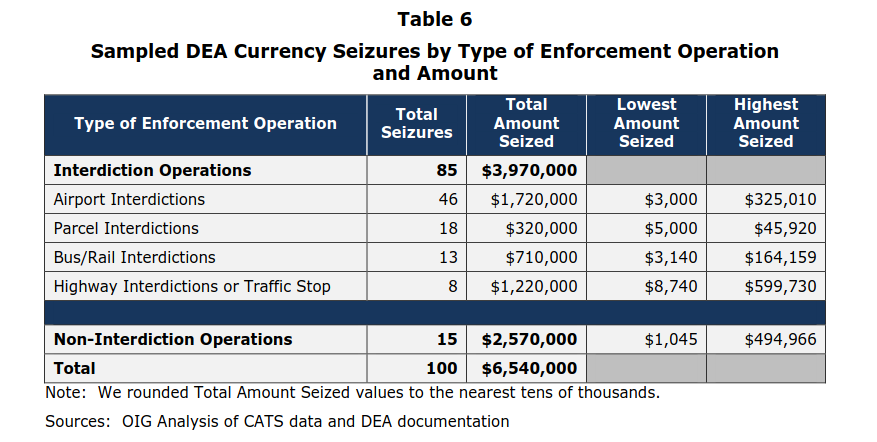 While these seizures are typically made by the Drug Enforcement Administration, they are typically triggered by Transportation Security Officers who spot cash in travelers’ carry-on baggage and who then tip off the DEA and/or seize and detain passengers and their luggage.

The focus of the Institute for Justice press release announcing the filing of Brown v. TSA is, quiet appropriately, on the issue of cash seizures and asset forfeiture. But the complaint also raises important issues related to (1) searches at TSA checkpoints that are not limited to “administrative” searches for weapons, explosives, and threats to aviation; (2) the authority, if any, of TSA Transportation Security Officers to detain or arrest passengers; and (3) whether a traveler is “free to leave” or has effectively been arrested or detained once their carry-on baggage — typically containing their most important documents, money, essential prescription drugs,  etc. — has been seized or is being held at a TSA checkpoint.

The Institute for Justice is looking for additional class members who have had cash seized without probable cause at airports, who either have a current airport cash seizure/forfeiture case involving TSA/DEA or who travel frequently with cash for business or other important reasons and have had their cash seized by TSA/DEA in the past. If you fit that description, and might want to join the case, contact IJ by email at “seizure@ij.org” or by phone at 703-682-9331 (ask for Adam Linthicum, IJ’s forfeiture intake coordinator).

4 thoughts on “Is the TSA “screening” for threats to aviation, or for cash and drugs?”