Buried in the latest Fall 2019 edition of an obscure Federal bureaucratic planning database called the Unified Agenda of Regulatory and Deregulatory Actions is an official notice from the U.S. Department of Homeland Security (DHS) that:

To facilitate the implementation of a seamless biometric entry-exit system that uses facial recognition … DHS is proposing to amend the regulations to provide that all travelers, including U.S. citizens, may be required to be photographed upon entry and/or departure [to or from the U.S.]. 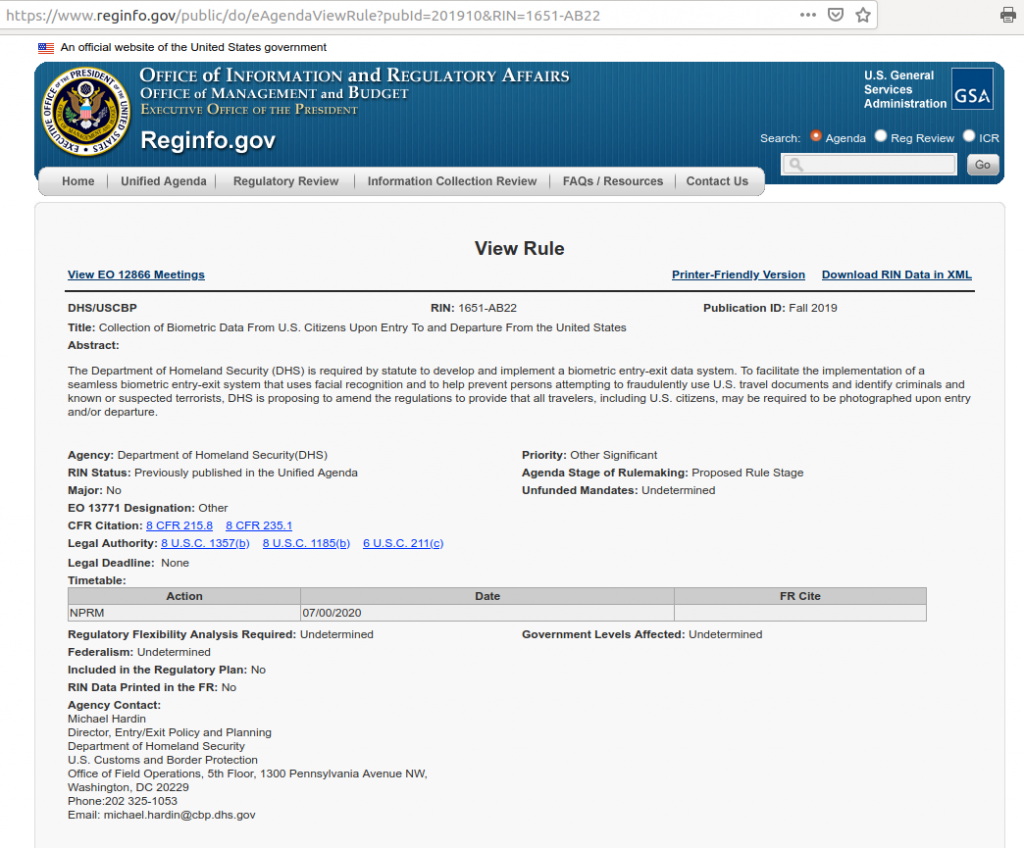 According to the latest version of the “Unified Agenda”, the DHS plans to publish a “Notice of Proposed Rulemaking” (NPRM) in approximately July 2020 to make mug shots mandatory for U.S. citizens leaving  or returning to the U.S.

The laws cited in the “Unified Agenda” as providing the statutory basis for the proposed rule pertain to searches of aliens (non-U.S. citizens) and the obligation for U.S. citizens entering or leaving the U.S. to have U.S. passports (a requirement of questionable and largely untested Constitutionality). It’s not obvious how the DHS will twist this into purported authority to require mug shots of all U.S. citizens who travel internationally.

The DHS has already given notice of its intention to solicit bids for systems to capture photos of all air travelers, including U.S. citizens, and is working with airlines and airports on schemes to share the photos, so that airlines and airports will be able to use data collected under government coercion for their own commercial business-process-automation and price-personalization purposes.

In November 2019, the U.S. Customs and Border Protection (CBP) component of DHS declared that its “test” of facial recognition on travelers crossing the US-Mexico border on foot had become a “permanent fixture” at certain pedestrian border crossings.

Meanwhile, the DHS continues to try to reassure travelers by claiming that U.S. citizens can and will be able to opt out of being photographed at airports or land border crossings — even though we continue to get reports, as we have told DHS officials directly, from travelers who were told by U.S. Customs and Border Protection officers and/or by line-minders at airports and borders that photography is mandatory .

Can you opt out? All current statutory and regulatory provisions for biometric entry and/or exit are explicitly applicable only to non-U.S. citizens. They provide no legal basis for photography of U.S. citizens leaving or returning to the U.S. But current law also provides no guarantee of a right for U.S. citizens to opt out, and no specification of procedures for opting out or for redress for U.S. citizens who aren’t allowed to opt out. That will all become moot if the DHS succeeds in promulgating regulations requiring all travelers to submit to mug shots, the courts uphold them, and travelers acquiesce.