The Department of Homeland Security and the Transportation Security Administration have threatened to prevent citizens of many US states from being able to travel by air within the US, starting in January 2018, because their state governments won’t dump all their driver’s license and ID card information into a nationwide database. But these threats didn’t actually cause states to follow the TSA’s illegal orders. So rather than follow through on the threat, which would risk a legal challenge that would make it clear the threat is hollow, the DHS has again blinked. It just quietly deferred its deadline about when it claims it will enforce the REAL-ID Act against airline passengers.

Just over a week ago, when we testified before the California Department of Motor Vehicles about why the largest state in the union should not comply with the REAL-ID Act, and could not do so without violating its state constitution and its residents’ rights, the DHS website included California among 21 states “under review” by the DHS for possible Federal interference with their residents’ right to travel by air beginning as early as January 18, 2018.

Just days later, the DHS in its standardless discretion granted 15 of these 21 states, including California, another round of “extensions of time” to comply with the REAL-ID Act until October 20, 2018.

The states granted another round of arbitrary extensions until October 2018 included eight of the nine states singled out by signs in airports across the country as targeted for TSA harassment of their residents who travel by air beginning in January 2018: 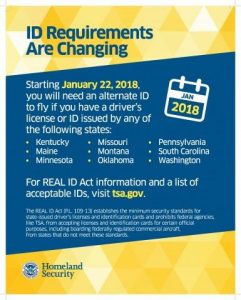 The dates picked by the DHS are as arbitrary as the DHS choices of which states to threaten. The DHS has repeatedly amended its REAL-ID Act regulations to postpone its threatened “deadlines”, but neither January 18, 2018, nor October 20, 2018, are dates that appear anywhere in the law or the most recently revised regulations.

Nor are these discretionary DHS decisions on extensions related to which states have actually complied with the criteria specified in the Federal law. The REAL-ID Act requires that, “To meet the requirements of this section, a State shall … Provide electronic access to all other States to information contained in the motor vehicle database of the State.” The only mechanism any state has come up with to try to comply with this part of the REAL-ID Act is to include information about all driver’s licenses and state ID cards it has issued in a searchable national ID database along with similar data from all other states. The Federal government hasn’t built such a database, has no authority to do so, and doesn’t want to be held accountable for it. So creation and operation of the database has been outsourced by participating states to a private contractor and subcontractor. As of now, only 14 states, most of them with relatively small populations, are participating, and only 2 other have signed letters of intent to join: 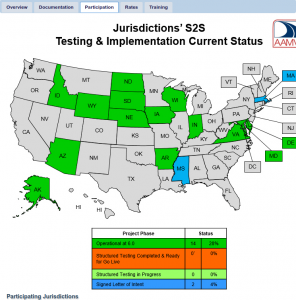 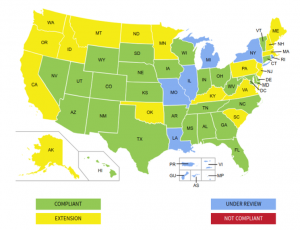 If this isn’t about which states are in compliance with criteria set by Federal law, and it isn’t about dates determined by Federal law or regulations, what’s going on? What’s happened is that the DHS has decided, again, that it isn’t actually prepared to carry out its threats to start picking on residents of certain states, when they try to exercise their right to travel on common-carrier airlines, on the basis of disagreement with state governments’ policy choices.

The DHS has always known that the Federal government has no authority to commandeer state resources, state funds, and state employees to enforce Federal desires for a state-issued “flyer’s license” and a national database of state-issued driver’s licenses and ID cards. It can only threaten, and the things it threatens to do violate the U.S. Constitution, so it can’t actually do them without risking a court decision that its entire threat program is illegal.

The DHS has again recognized, as it has each time it has revised its threatened dates for REAL-ID Act enforcement, that if the DHS tried to follow through on its threats to have TSA checkpoint staff harass or interfere with travel by residents of certain states, (1) travelers will be smart enough to blame the Federal agents and contractors blocking their way to the plane, not state legislators who didn’t capitulate to unlawful Federal threats, (2) travelers will resist this unlawful interference with their rights in many ways, including legally, and (3) the TSA and its contractors are likely to lose these lawsuits, since no current or proposed law or regulations authorizes them to require ID from airline passengers or interfere with the right to travel of individuals without TSA-approved ID. Selective interference with the rights of residents of certain states, on the basis of disagreement with state governments’ policy choices, would raise even more legal challenges.

Threats from Federal bullies come and go, but neither state officials nor members of the flying, driving, and traveling public should be stampeded by them.