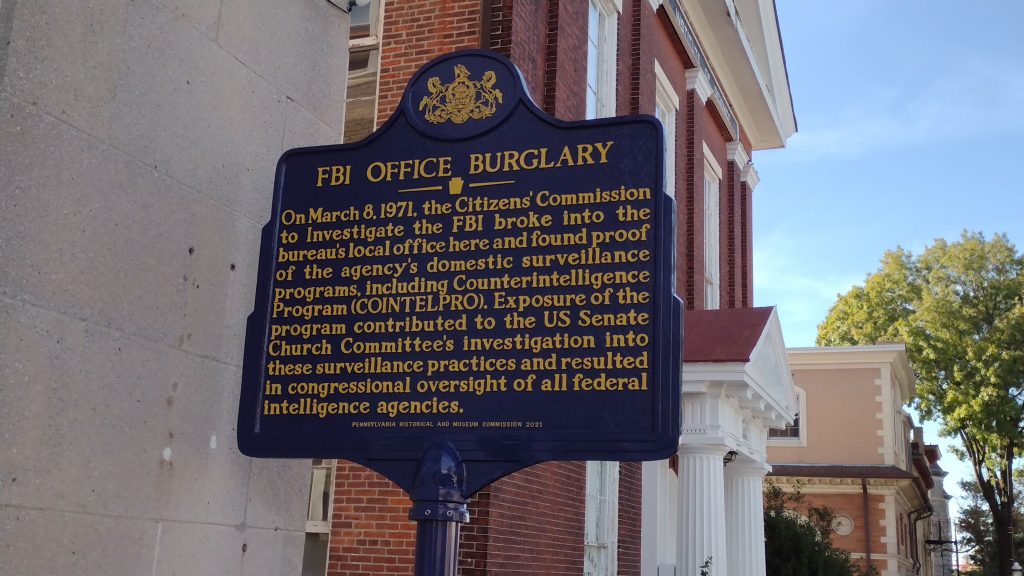 “Democracy needs whistleblowers. That’s why I broke into the FBI in 1971,” begins an op-ed by Bonnie Raines, one of the members of the previously-anonymous “Citizens’ Commission to Investigate the FBI” who took the spotlight today through public appearances and interviews and the publication of a new book about their 1971 action, The Burglary, by former Washington Post reporter Betty Medsger.

“The Complete Collection of Political Documents Ripped-Off from the F.B.I. Office in Media, Pa., March 8, 1971” was eventually published in full a year later by the War Resisters League as a special double issue of WIN Magazine. These documents included the first public appearance of the FBI code-word “COINTELPRO“.  The documents, damning the FBI and J. Edgar Hoover in their own words, and the exposure of COINTELPRO, unseated Hoover and the FBI from their “untouchable” pedestals of public respect and secret power, prompted the Church Commission hearings, and led to executive orders and legislation at least purporting to reign in FBI political surveillance and meddling in non-criminal political activities.

Daniel Ellsberg (who praises the new book, The Burglary, as “a masterpiece”) has spoken repeatedly over the years of his desire to learn the identities of the members of the Citizens’ Commission, so that he could thank them personally for their whistleblowing. Today we are finally able to give the members of the Citizens’ Commission, named and unnamed, the credit they have long deserved for their courage and commitment in service to the causes of truth and justice.

But members of the Citizens’ Commission identified themselves publicly today not to claim their rightful place in the pantheon of muckraking heroes who have taken personal risks to expose government misconduct (entitled though they are to do so) but in order to call attention to the continuing need for more actions like theirs, and to the righteousness of whistleblowers like Edward Snowden who have taken such actions more recently.

The Citizens’ Commission weren’t “leakers”.  They were outsiders tapping into the sewage pipe of government secrets from the outside, not insiders “leaking” secrets from within the apparatus of government surveillance and subversion.  It’s important to distinguish them from insiders like Edward Snowden, Chelsea Manning, Dan Ellsberg, and Tony Russo.

As the name of the “Citizens’ Commission to Investigate the FBI” itself quite accurately reflects, its members acted as independent investigators and investigative journalists, not “leakers”.  They were the “hackers” of their time, carrying out their hacks with disguises, crowbars, and photocopiers rather than with code.

That makes the courage and commitment of the Citizens’ Commission all the more noteworthy. Ellsberg, Snowden, and Manning were all in positions of privileged access to closely-held information. The knowledge of that unusual privilege could, for people of conscience, translate itself into a greater sense of obligation to act on one’s knowledge. The members of the Citizens’ Commission, on the other hand, started out with no special knowledge and no special access. They did something that any member of the public could have done.

“But there was absolutely no one in Washington — senators, congressmen, even the president — who dared hold J. Edgar Hoover to accountability,“ John Raines told the New York Times. “It became pretty obvious to us that if we don’t do it, nobody will.”

In their press conference today, members of the Citizens’ Commission reminded reporters that the government made the same claims about the documents they stole from the FBI and gave to journalists as it has made recently about the documents taken from the NSA and passed on to journalists by Edward Snowden. In both cases, the government tried to persuade newspapers not to publish the documents, and justified criminal investigations of the thefts or leaks, on the basis of claims that the documents contained critical information that could jeopardize national security if revealed to the public.

“Within days of our action, the government was spreading stories that the documents included things like locations of missile silos and so forth,” Keith Forsyth of the Citizens’ Commission points out.

“That was a complete fabrication,” Forsyth says, based on his knowledge of documents the Citizens’ Commission eventually burned — pertaining to ordinary criminal matters rather than specifically political activities — as well as the political documents they released to the news media.  Forsyth says he’ll believe Snowden has released information genuinely damaging to national security if the government produces an actual example of such a disclosure in the material Snowden has given to the press.

We should be equally skeptical of contemporary DHS claims about the “sensitivity” and need for secrecy of information about its operations.  One of the lessons we draw from the FBI response to the actions of the Citizens’ Commission is that such claims are typically made primarily to protect government officials against public accountability, not to protect the public against private crime or threats from abroad.