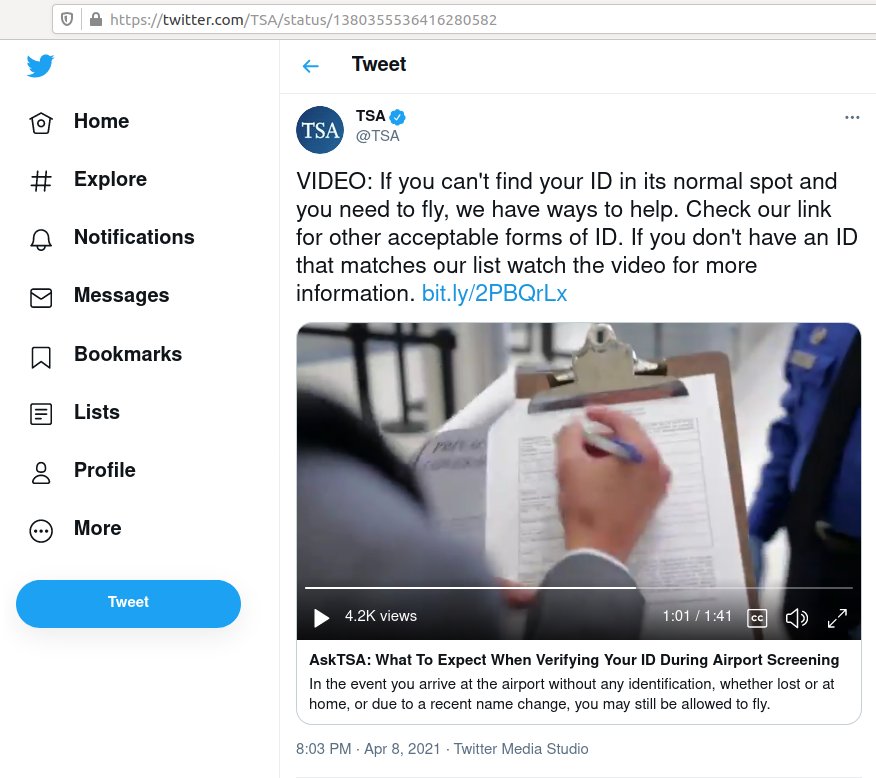 For years Transportation Security Administration (TSA) and Department of Homeland Security (DHS) officials and their state government collaborators have been repeating the big lie that all airline passengers must have government-issued ID credentials. That lie has been included in TSA and DHS press releases, airport signage, and Tweets from the official DHS and TSA accounts.

This public relations lie has been disclaimed, over and over, in TSA and DHS court filings and sworn testimony. But now it has been contradicted on the TSA’s official Twitter feed.

Tonight the TSA Tweeted a video showing some of the ways you can fly without “acceptable” ID or without any ID at all.

If the TSA deems your ID “unacceptable”, you can still fly if you can show two or more pieces of suitable (according to the TSA’s secret non-rules) although “unacceptable” ID.

The TSA video also shows that even if you have no ID at all, you can fly if your answers to questions relayed by phone by the TSA’s ID Verification Call Center match the information in the (secret) file of information that has been linked to you by the commercial data aggregator Accurint (originally part of the discredited “Total Information Awareness” program but now a division of Lexis-Nexis).

No ID at all, much less “acceptable” ID,  is actually required to fly. So changes in REAL-ID Act regulations or TSA/DHS orders to airlines as to what ID is “acceptable” are irrelevant to whether you have right to fly without ID. Nothing in the REAL-ID Act negates this right.

In the screengrab above (one minute in), the video shows a traveler filling out a copy of TSA Form 415, “Certification of Identity”. The TSA has been using versions of this form illegally since at least 2008, without ever having obtained the approval from the Office of Management and Budget (OMB) required before any collection of information such as this by a Federal agency. The TSA has twice said it intends to seek approval from OMB for Form 415. But in the face of our objections, the TSA has yet to request, much less obtain, that approval. It’s unclear whether when the TSA will actually do so.

To avoid having to give public notice of its planned information collection or respond to our objections, the TSA tried to get Congress to enact a special airport exception from  the Paperwork Reduction Act (PRA). But Congress declined to do so.  It’s unclear whether and if so when the TSA will actually apply to OMB for the required approval, or what additional illegal actions it may try to take in the meantime.

All use of both Form 415 and the associated questioning of travelers continues to be in violation of the PRA. As we noted in 2008 when the TSA first started asking travelers to fill out the form later labeled Form 415, the PRA provides an absolute defense against any sanctions the TSA might try to impose for refusing to fill out this unapproved form or cooperate with the TSA’s “20 questions” game of ID verification security theater.

Travelers can and should say no. Fly without ID, and exercise your right to remain silent.