Fragmentary and jumbled records related to the REAL-ID Act of 2005 released by the US Department of Homeland Security in response to one of our Freedom Of Information Act (FOIA) requests don’t reveal much about DHS policy, but do provide a glimpse of DHS practices and plans.

The DHS has been threatening to harass, interfere with, or bar access to facilities or passage through checkpoints (including, but not limited to, those at airports) to people who don’t have, don’t carry, or don’t show ID; show ID that the DHS doesn’t deem compliant with the REAL-ID Act; or show ID issued by states or territories that the DHS deems insufficiently compliant with the REAl_ID Act.

These threats to deny equal rights to residents of noncompliant states and territories have been central to the DHS campaign to extort compliance from state and territorial officials reluctant to upload their residents’ data to an outsourced, privately-held national ID database.

But what sort of enforcement problem, at what scale, is this likely to pose for the DHS and those collaborators carrying out its REAL-ID directives? How many people will be affected, at what sorts of facilities and locations, in what circumstances?  Inquiring minds want to know, including opponents of the REAL-ID Act like ourselves, but also including officials at DHS headquarters trying to devise a workable REAL-ID enforcement plan.

In December 2014, the “Office of State-Issued ID Support” in the DHS Office of Policy directed all DHS components and other Federal departments to submit monthly reports to OSIIS on “the number of encounters of individuals presenting driver’s licenses from noncompliant states for purpose of accessing Federal facilities. This data should be sent monthly to DHS (OSIIS@hq.dhs.gov) for collection no later than the tenth day of each month. DHS will use this data to evaluate the impact of REAL ID enforcement on the public.”

In January 2016, after we learned of this directive, we made a FOIA request for these reports. It should have been easy for the DHS FOIA office to find them, since they were all supposed to be sent to a single, specified functional email address.

But instead of searching the electronic archives of that mailbox or doing anything  else reasonably calculated to retrieve the responsive records, the DHS FOIA Office (a) referred part of our request to the TSA (which has yet to respond or say when, if ever, it expects to do so) and (b) produced a single mostly-redacted PDF file derived from a summary of the reports and labeled as a final and complete response to our request. None of the reports received at “OSIIS@hq.dhs.gov” were released, nor were any of them claimed to be exempt from release. In other words, most of our request was simply ignored.

After several months of negotiations, the DHS FOIA office agreed to re-open our request as “amended” and review the email messages received at “OSIIS@hq.dhs.gov”.

In October 2017, after we requested these reports, the DHS rescinded the reporting requirement, presumably to avoid creating or compiling any central repository of evidence of how much effect “enforcement” would or wouldn’t have, how prepared or not Federal agencies are to carry out DHS threats, or how seriously those threats should or shouldn’t be taken. But there should still be more than two years of reports subject to our request.

Two years later, we’ve finally received the first incomplete and badly munged (as usual) installment of aggregated and seemingly randomly sequenced PDF files of images (cover letter, part 1, part 2) — some legible, some so blurry as not to be — derived from some unspecified fraction of these email messages.

We still haven’t been able to find out how much more data has been found, or when if ever it will be released. But what can we learn from what has been released to date?

Few of the reports we requested are included in the most recent release of files. Most of the latest interim release consists of other correspondence between OSIIS and other DHS components, other Federal agencies, state and local officials, and members of the public.

To the extent one can draw inferences from this sample of questions and answers, DHS REAL-ID Act policy appears to have been centralized, secretive, and arbitrary.

Many individuals with questions about the REAL-ID Act received answers directly from, or at least in the name of, REAL-ID czar Ted Sobel (ted.sobel@dhs.gov, 202-282-9570), formerly director of OSIIS and today Acting Deputy Assistant Secretary of Homeland Security for Screening Coordination in the DHS Office of Strategy, Policy, and Plans. But none of those responses disclosed to date actually referenced the terms of the REAL-ID Act or the implementing regulations issued by the DHS. Instead, they referred to press releases on the DHS website (which have often contained blatant lies about the REAL-ID Act) and/or to conclusionary declarations of discretionary and unpublished DHS practices and intentions.

States and territories have been held hostage to discretionary decisions by the DHS as to whether to deem them sufficiently “compliant”, or to grant extensions of time to comply. But the DHS  refused to disclose any criteria for these decisions — that’s what it means for them to be “discretionary” — or even to reveal what it had communicated to states and territories about its decisions or the basis for them. “[W]e do not release the details of our communication with states.” And the DHS, while holding closed-door meetings with state and territorial officials, declined (for unspecified reasons) all invitations to testify at state legislative hearings: “[T]he Department does not testify at State level hearings.”

Attorneys from several states asked OSIIS whether or how REAL-ID Act enforcement would change what, if any, ID would be required for entry to Federal courthouses. OSIIS Director Sobel answered vaguely that, “Generally, it should not affect access to courts.”

On behalf of OSIIS and the DHS, Sobel deferred to local courthouse guards: “you may wish to confirm with the specific court house in question.” But the message below, from the same collection of email correspondence suggests that those guards themselves don’t know what rules, if any, they are supposed to follow, or how they are expected to exercise discretion as to who they are to allow to bar from entering Federal courts: 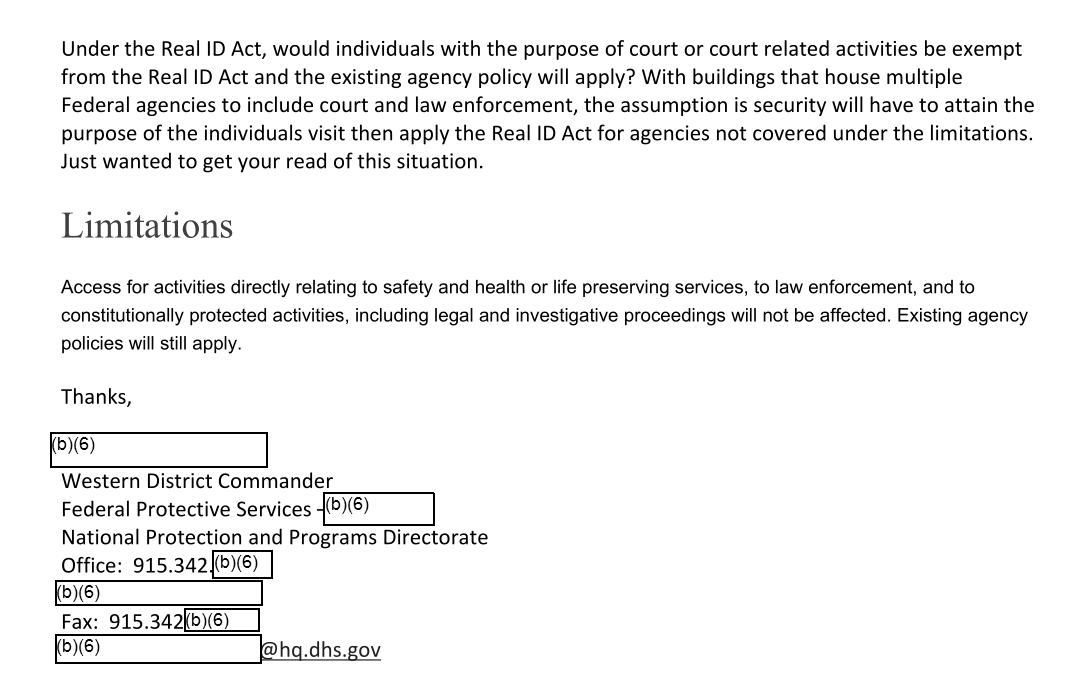 The FPS Commander in charge of controlling access to nine Federal courthouses across the Western District of Texas, from Austin to El Paso, many of them in buildings also housing other Federal offices under FPS jurisdiction, wrote to OSIIS seeking guidance on how to prepare to enforce the REAL-ID Act.

The DHS website says — as usual, without reference to the REAL-ID statute or regulations — that “Access for activities directly relating to safety and health or life preserving services, to law enforcement, and to constitutionally protected activities, including legal and investigative proceedings will not be affected.”

In light of this, the EL Paso FPS Commander wanted to know:

Under the Real ID Act, would individuals with the purpose of court or court related activities be exempt from the Real ID Act and the existing agency policy will apply? With buildings that house multiple Federal agencies to include court and law enforcement, the assumption is security will have to attain [sic, probably means obtain] the purpose of the individuals visit then apply the Real ID Act for agencies not covered under the limitations. Just wanted to get your read of this situation.

Good questions, and from an agency that will need to know the answer.

The Federal Protective Service (FPS) would be expected to play one of the largest roles of any Federal law enforcement agency in REAL-ID Act enforcement. Now part of DHS, FPS was originally the law enforcement division of the General Service Administration, which manages most civilian Federal real estate. FPS is one of the largest general law enforcement divisions of the DHS, and is responsible for policing most Federal courthouses, office buildings, and other civilian facilities. If FPS commanders responsible for access to Federal courthouses and offices haven’t received any marching orders on how to apply the REAL-ID Act to access to civilian Federal facilities, it seems unlikely that any Federal police have received such guidance.

If guards at the entrances to Federal courthouses and office buildings — mainly FPS Officers or contractors hired and supervised by FPS — are to bar the courthouse doors to entry by some people without ID or with noncompliant ID or ID form noncompliant states or territories, and allow entry to others, on the putative basis of the REAL-ID Act and the purpose of their visit, they will need to know(1)  which purposes are allowed, (2) what criteria of entry to apply, (3) what evidence of purpose of visit to accept or require, and (4) what adjudicatory procedures to follow in making determinations of who to admit and who to turn away. And if the courthouse doors are barred, how can you get access to the courts to obtain judicial review of the denial of access? Catch 22?

Many Federal courthouses and other Federal office buildings also house district offices of members of Congress. In these settings, how are FPS Officers and entry control contractors supposed to ensure “the right to petition for redress of grievances”?

As we noted above, We are still waiting for a further response to this FOIA request. The files we have received to date are incomplete, jumbled in sequence, and munged. They don’t appear to include any response to the questions asked by the FPS. But the fact that these questions are being asked at all suggests that threats to bar entry to Federal courthouses and office buildings on the basis of the REAL-ID Act may be a paper tiger.

3 thoughts on “Questions about the REAL-ID Act”