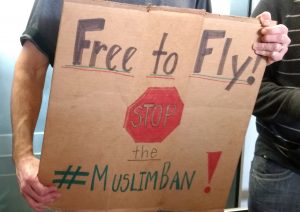 Since the start of our work against restrictions on freedom to fly, well before September 11, 2001, we’ve been wondering what further outrage it would take to provoke mass protests at airports, and when that would finally happen.

Now we know. Thousands of protesters (including at least one of President Trump’s fellow billionaires) filled international airports across the country for several days and nights starting last weekend, in reaction against President Trump’s executive order to detain and deport any arriving non-US citizen known to be a citizen (even a dual citizen) of one of seven publicly blacklisted Muslim-majority countries: Iraq, Iran, Libya, Somalia,  Syria, Sudan, and Yemen.

We’ve been talking about related issues for years. Now that they are out in the open, the question is what the outraged public will do, at whom the outrage will be directed, and how airlines — yes, airlines, and not just governments — will respond.

For what it’s worth, it’s unclear whether this executive order would apply to an asylum seeker who renounces their original citizenship in one of the blacklisted countries, even one who makes that renunciation at the check-in counter or in flight, and thereby arrives in the US stateless.  This may seem a far-fetched scenario, but it is common for stateless asylum seekers to use “invalid”, forged, or fraudulent documents to board flights, and then to destroy those documents in flight so as to arrive without papers. Deportation of any stateless person, and most of all a stateless asylum seeker, is especially problematic under international human rights law. But that’s the least of the problems with President Trump’s executive order.

Here are some key things we’ve learned from our work over the last 20 years that people — including those just now beginning to think about the right to fly, especially as it relates to immigrants, refugees, and asylum seekers — need to understand about what is happening, who is responsible, what will happen next, and what can be done: