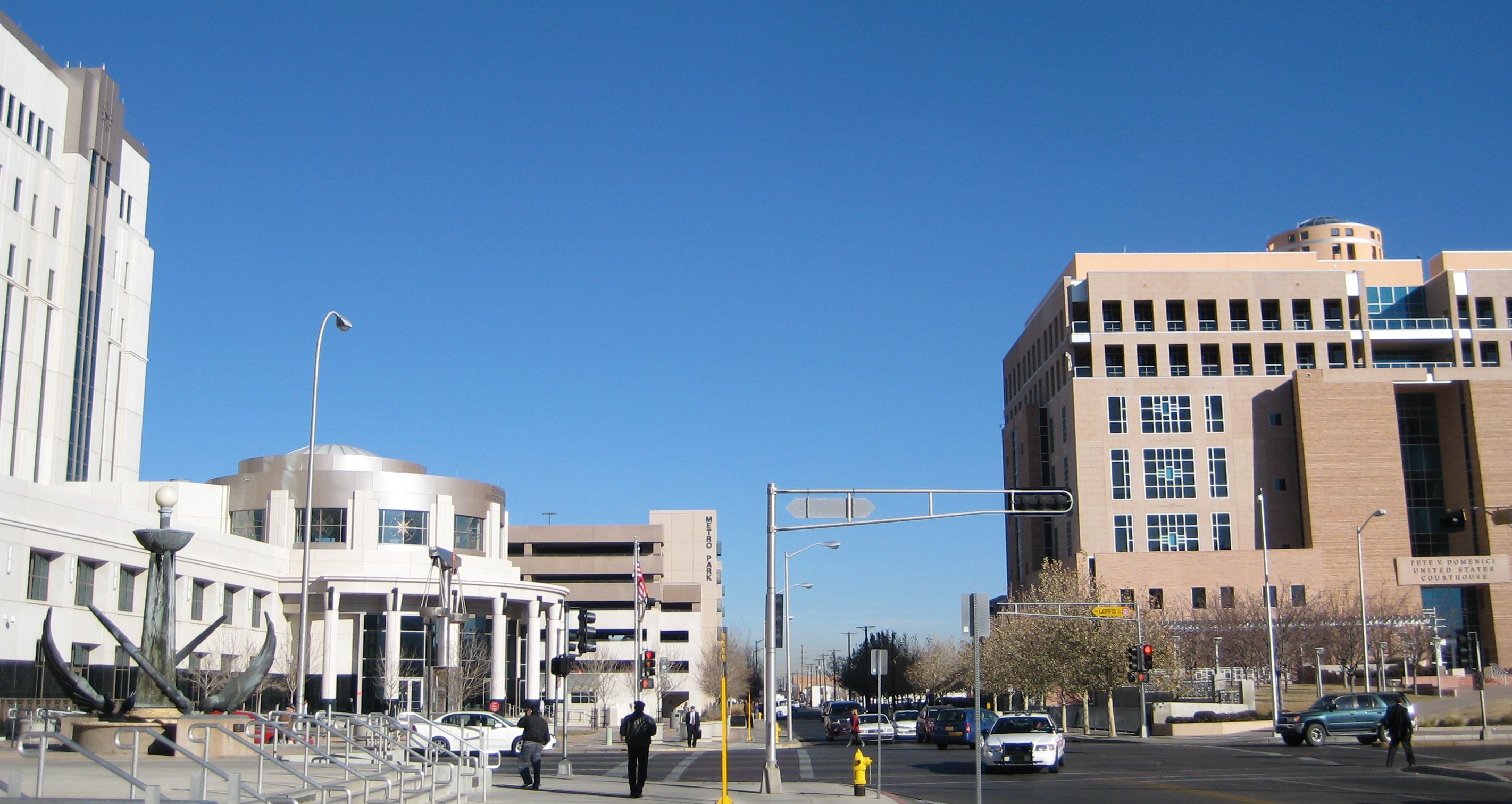 Why are we here? We’re here in Albuquerque to observe the the trial of Phil Mocek, which began yesterday and continues today. We’re here with other folks who’ve flown, driven, and ridden trains and buses from across the country to show our support for those who question the illegitimate claims to authority of the TSA and try to document what happens when you try to travel without showing ID.

Once we are able to process them, we’ll be posting audio recordings and photos as well as more details from the trial.

Before we get to what’s happened in court, however, we need to answer a preliminary question: Why is this case in Bernalillo County Metropolitan Court (above, left) and not across the street in Federal court (above, right)?

That question seems especially natural to those who read the hit-piece on the front page of the Albuquerque Journal the day before the trial began.  Apparently intended to prejudice potential jurors against Mr. Mocek, and posted approvingly by the District Attorney on Twitter and her Facebook wall, that story focused on (false) claims that passengers are “required” to show government-issued ID to fly.

But the reason this case isn’t in Federal court is that TSA procedures (and, more importantly, neither any Federal law or regulation, the U.S. Constitution, or international  human rights treaties) don’t require travelers to show ID and don’t prohibit photography or recroding at TSA checkpoints.

If there were any such Federal rule against what Mr. Mocek was doing, the TSA would have called the FBI, not the local police, and Mr. Mocek would have been charged with Federal offenses.

That didn’t happen.  Mr. Mocek has never been accused of any violation of any TSA or other Federal regulations or laws.  He was arrested and is on trial on (false) state and local charges precisely because the TA and Albuquerque police objected to his exercising his rights under Federal law.

On the contrary, the first day of this trial confirmed that, as we’ve said all along:

In their opening statements, both Assistant District Attorney Daniel Rislove and defense attorney Nancy Hollander agreed that ID is not required to fly. That was confirmed by the sole witness to testify (for the prosecution) before the trial recessed yesterday.

Lead Transportation Security “Officer” Jonathan Breedon (he admitted that TSA checkpoint personnel are not law enforcement officers), who was in charge of the “travel document checking station”, testified that the TSA doesn’t require anyone to have or show ID to travel. You can travel without ID, and, “It happens all the time. We have a procedure for that,” he testified, although he claimed that the procedure for flying without ID is secret “Sensitive Security Information,” as is the form that is given to each person who flies without ID for them to sign, and which we posted online years ago.

What the TSA doesn’t have procedure for, apparently, is what to do when a traveler exercises their right to photograph or record what is being done to them.  Under cross-examination, Lead TSO Breedon admitted that the statement to Mr. Mocek on the video played in court, “It’s a Federal checkpoint. You can’t take pictures here,” was false. But despite knowing that was false, the TSA staff called in the local police and then stood aside while they arrested Mr. Mocek on false charges.

The trial will resume at 9:30 Friday morning with testimony from the Albuquerque police, followed by the case for the defense. The case could go to the jury Friday afternoon.

That shouldn’t be noteworthy, but it is.

Faced with an imminent judicial slapdown, the DHS and FBI have ended their extra-judicial banishment (“proxy rendition”) of a US citizen who has been detained and tortured in Kuwait but was refused boarding by this same airline earlier this week, despite holding a valid full-fare ticket purchased by his family, when Kuwaiti authorities tried to deport him to the US.

Although Gulet Mohamed has been charged with no crime in either the USA or Kuwait, and although he has been given direct notice of no injunction or other order restraining his right to return to the US, US government spokespeople have confirmed that the US ordered airlines subject to US jurisdiction not to transport him. Presumably, the no-fly order to United Airlines took the form of a “not cleared” message (or a non-response, the default “fly/no-fly” state being “no” in the absence of explicit individualized “clearance”) after Mohamed’s PNR and API date were sent by the airline the DHS as part of the APIS and/or Secure Flight schemes for surveillance and control of air travel.

Kuwaiti law reportedly requires deportation by direct flight directly to the deportee’s destination, at least where such a flight exists. Even if Kuwait allowed deportation by ship, API data and “clearance” permission is required from cruise and ocean shipping lines carrying  passengers to the US, as well as airlines.) So Gulet Mohamed remained in detention in Kuwait, under imminent threat of renewed torture (and under continued interrogation by the FBI, without his lawyer present.

On Monday, Mr. Mohamed was denied passage back to the US by United Airlines. On Tuesday, his lawyers from the Council on American-Islamic Relations filed suit, (copy of complaint) seeking an emergency order prohibiting the DHS or FBI from interfering with Mr. Mohamed’s right of return to the US.  Within hours of the filing of the case on Tuesday, a hearing on their motion was held before a Federal judge, who said the government’s actions appeared, on their face, to be a violation of Mr. Mohamed’s fundamental rights.

The judge ordered the parties to return to his court on Thursday, the plaintiff (Mr. Mohamed) to provide declarations substantiating the allegations in the complaint and the defendants (DHS and FBI) to show cause why an injunction should not be issued.

But rather than make any attempt to justify their actions in extra-judicially exiling Mr. Mohamed form his country, the government’s lawyers responded both aat Tueaday’s hearing and at the follow-up hearting on Thursday by telling the judge that they compliant would soon be moot because they were making “arrangements” to change their orders to the airline and allow Mr. Mohamed to return home.

On Thursday night (early Friday morning Kuwait time), Kuwaiti authorities once again tried, and this time were allowed, to put Mr. Mohamed on a flight home to the U.S. as a deportee from Kuwait. That flight landed at Dulles early Friday morning, Washington time.

Mr.Mohamed, it should go without saying, has never been charged with any crime, either in the U.S. or Kuwait, although we don’t yet know how he’ll be treated by the US on arrival. A US citizen has the right to remain silent at the border or airport when re-entering the country. But given their prior actions and repeated attempts to question Mr. Mohamed without his lawyer, we wouldn’t count on the DHS or the FBI to respect his rights now. [Update: FBI Interrogating Gulet Mohamed Without Counsel at DC Airport]

We’re pleased that Mr. Mohamed is back home in his country.  But we are disturbed that the U.S. government, through a case-by-case exercise of standardless administrative “discretion” exercised only after a lawsuit was filed, has once again fulfilled its repeatedly and explicitly stated goal of avoiding having no-fly decisions and orders subjected to judicial review.

In short, Mr. Mohamed was allowed to come home in order to insure him justice, but in order to insure that the DHS and FBI remain free to inflict similar injustice on others in the future.  As Mr. Mohamed’s lawyer, Gadeir Abbas of CAIR, put it earlier in the week, “The reason I fully expect the government to have Gulet on a plane back by Thursday is that they want to continue this objectionable, immoral, and patently unconstitutional practice.

Mr. Mohamed’s lawsuit is not moot, and will continue. His treatment appears quintessentially “capable of repetition, yet evading review.”

We’re left with this:

In the face of a judicial demand to proffer a justification for its no-fly orders, the government made no attempt to do so.  Instead, they indicated by words and deed that they were more afraid of allowing a Federal judge to review the legality of their actions than they were of allowing Mr. Mohamed — who they had claimed it would be too dangerous to allow on any plane, even seated between armed air marshals — to come home to his country.

When an agency of the U.S. government is more afraid of judicial review than of terrorism, one can only wonder what else — worse even than the torture to which Mr. Mohamed was subjected by U.S. proxies in Kuwait — it has to hide.