Inquiring minds at the American Civil Liberties Union (ACLU) want to know if officers or agents of US Customs and Border Protection (CBP) or other components of the Department of Homeland Security (DHS) have tried to stop you from taking photographs, filming, or recording publicly-visible scenes and events at US land border crossing points.

As we’ve noted many times in this blog, and as as has been established in court cases in which we have participated, you have the right to photograph and record Transportation Security Administration staff and contractors at TSA checkpoints at airports.

We haven’t talked about land “ports of entry” as much as airports, but you also have the right to photograph and record at land border crossings, at least if you do so from places accessible to members of the public who aren’t crossing the border. (We don’t mean to suggest that you don’t also have the right to record or livestream what happens to you as you cross the border. We think you do, but that hasn’t yet been litigated as extensively.)

Read on for more about the state of the law, what you can do to reduce the chances that your right to photograph and record near borders  will be violated, and what to do if it is.

END_OF_DOCUMENT_TOKEN_TO_BE_REPLACED

For several years the Identity Project has been engaging with the Port of Seattle over its expansion of automated facial recognition to track travelers at Sea-Tac Airport.

Today we made yet another (virtual) visit to the Port of Seattle Commission to give the following comments (PDF) on the latest test of the new International Arrivals facility at Sea-Tac, scheduled to open  next week:

Comments of the Identity Project to the Port of Seattle Commission
for the Commission meeting of April 12, 2022, re: signage for travelers about the collection of facial images at the International Arrivals Facility at Sea-Tac Airport

Members of the Port of Seattle Commission:

The Identity Project (PapersPlease.org) is a nonprofit civil liberties and human rights organization with expertise in identity-based surveillance and control of travelers.

We are submitting these comments to call to your attention the failure of both the Port of Seattle and US Customs and Border Protection (CBP) to provide notice to travelers of CBP’s collection of facial images (“biometrics”) at the new International Arrivals Facility (IAF) at Sea-Tac International Airport, as required both by Federal law and by the policies on use of biometrics adopted by the Port Commission.

END_OF_DOCUMENT_TOKEN_TO_BE_REPLACED 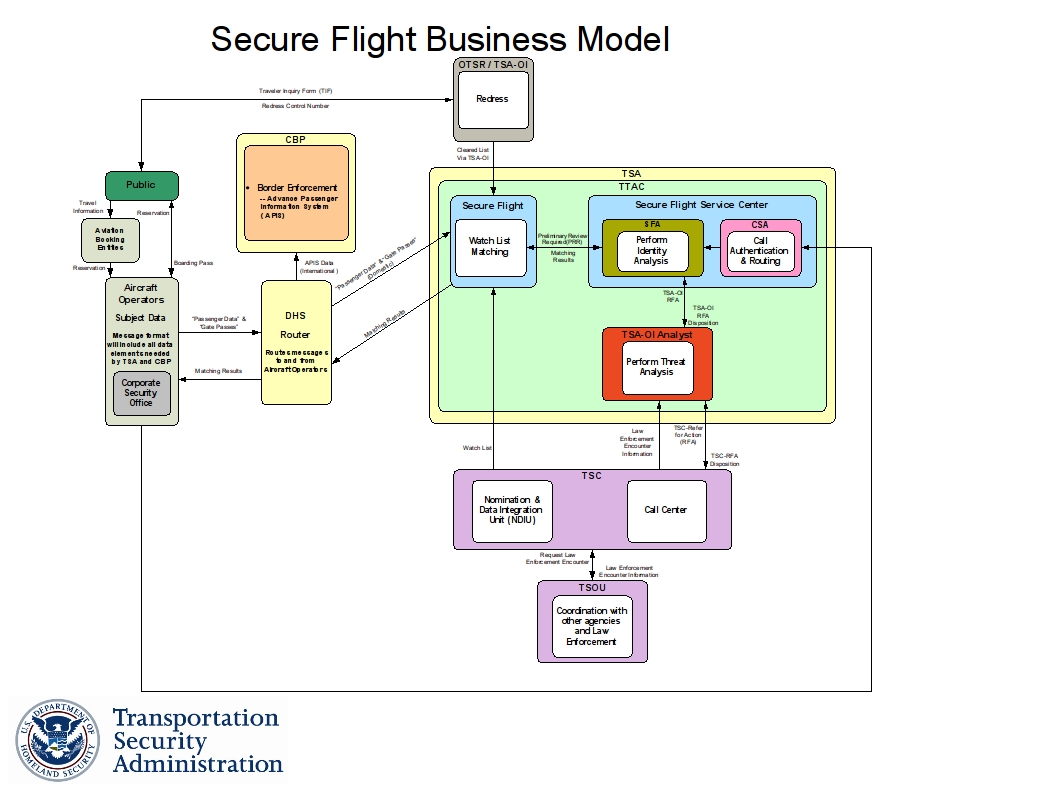 [“Secure Flight” process flow used by the TSA for airline passengers and being tested on Amtrak passengers. The red box at right center is the “black box” for algorithmic profiling, blacklist/blocklist enforcement, and fly/no-fly decision making.]

Amtrak has reportedly given the Transportation Security Administration several months of  archives of Amtrak passenger reservations and frequent rider profiles. At Amtrak’s request, the TSA has used these records to test the TSA’s ability to extend to Amtrak passengers the ID-based profiling and blacklisting algorithms the TSA already applies to air travelers.

If you aren’t allowed to travel by air, the right to travel by train is critical. And while all common carriers have an obligation to transport all would-be passengers, Amtrak as a government agency should be most strictly held to that obligation.

The plans to run a batch of historical Amtrak reservations through the TSA’s “threat assessment” black box were disclosed in a Privacy Impact Assessment (PIA) quietly posted on the Department of Homeland Security website last December, and first noted in a news report by Mark Albert of Hearst Television earlier this week.

The PIA posted by the TSA in December 2021 said that Amtrak would give notice of the batch transfer of reservation archives to the TSA through an update to Amtrak’s privacy policy. That policy was last updated in November 2021, and doesn’t mention data sharing with the TSA. But a follow-up report today by Hearst Television quotes the TSA as saying that, “The collection of data and analysis has already occurred,” without the promised notice in Amtrak’s privacy policy.

What will this TSA’s test of Amtrak passenger profiling reveal? Of course some of the people who aren’t allowed to travel by air travel by train or bus instead. Amtrak and Greyhound are the long-distance carriers of last resort for undocumented and blacklisted travelers. So it’s to be expected that the TSA will find a disproportionate percentage of the people it has blacklisted from air travel on Amtrak passenger manifests.

Even more people will be forced to take Amtrak or Greyhound instead of flying if the TSA — as it has threatened — starts preventing people from flying if they don’t have, or don’t show, any ID, or ID the TSA deems to be compliant ID with the REAL-ID Act.

Does this mean that would-be terrorists are riding Amtrak trains? No. It means only that people blacklisted from air travel are riding trains. So far as we know, there have been no terrorist attacks on Amtrak trains. The false positives generated by the TSA’s “threat assessment” algorithms and precogs are evidence of what’s wrong with predictive profiling and why the right to travel by common carrier is so important.

The TSA and DHS have long wanted to extend their prior restraint of travel from airline passengers to all modes of travel including  trains and buses, but have lacked any legal basis to do so. Amtrak’s sharing of reservation  data with the DHS, even for passengers on international trains, has been represented as a “voluntary” action by Amtrak.

In the absence of any notice from Amtrak, it’s unclear what Amtrak claims as the legal basis for the recent “test” of TSA profiling of passengers on domestic Amtrak trains. END_OF_DOCUMENT_TOKEN_TO_BE_REPLACED