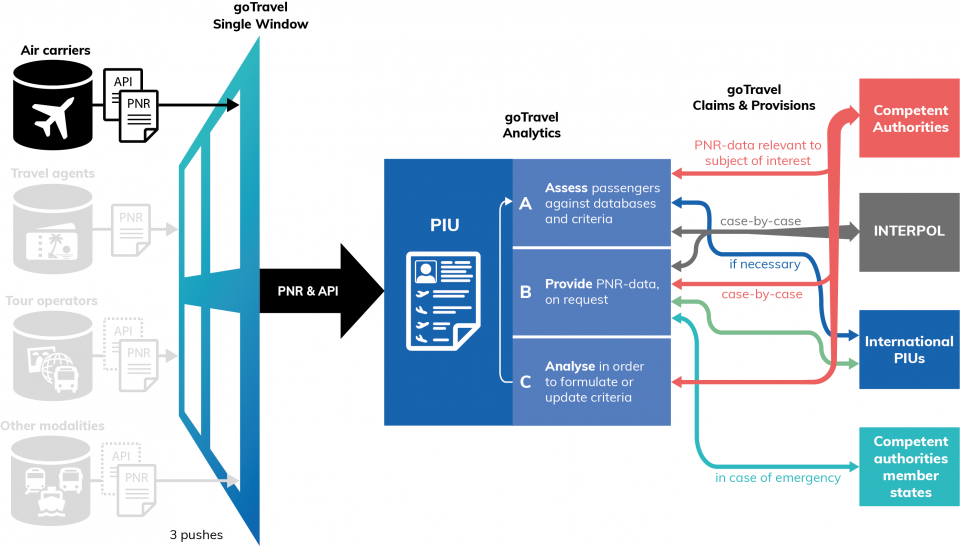 [Flowchart of “goTravel” software package developed by the government of the Netherlands and offered to U.N. members through the Countering Terrorist Travel Programme of the U.N. Office of Counter-Terrorism (UNOCT)]

National governments of all members of the United Nations are being pressured to implement new U.N. mandates for surveillance, profiling,  and control of air travelers.

These unprecedented mandates for the creation and deployment of new surveillance and “pre-crime” policing systems in every U.N. member state  are the result of a successful twenty-year campaign carried out by the US and its allies through the U.N. Security Council and the International Civil Aviation Organization (ICAO) as policy laundering proxies.

This U.N. mandate is illegal: it contravenes provisions of the International Covenant on Civil and Political Rights, to which almost all U.N. members are parties. It’s immoral: it goes against basic principles of justice, including the presumption of innocence and punishment for criminal actions rather than for inferred criminal states of mind. And it’s wrong: it presumes the existence of human and/or robotic “precogs” that can predict future crimes.

U.N. members that haven’t yet set up “pre-crime” police agencies to surveil and profile air travelers are being pushed by Security Council and ICAO directives, and pulled by offers of  their choice of free “Precog in a Box” software and other training and support from US Customs and Border Protection (CBP) through the World Customs Organization (WCO), or from the government of the Netherlands through the Countering Terrorist Travel Programme of the U.N. Office of Counter-Terrorism (UNOCT).

But how did we get here? What’s going on? And what’s wrong with this picture?