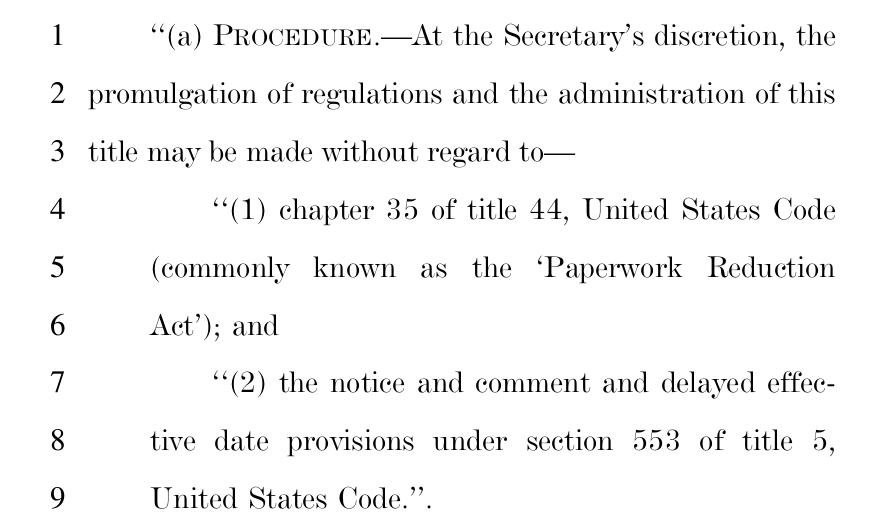 S. 4133 , the “REAL ID Modernization Act”, was introduced by the chair of the Senate Homeland Security and Government Affairs Committee (HSGAC), and co-sponsored by the ranking minority member of that Committee. At a Senate HSGAC business meeting on July 22nd, S. 4133 was favorably reported to the floor with no discussion or opposition, by a voice vote en bloc with several other “uncontroversial” bills.

Most of the provisions of S. 4133 reflect the lobbying agendas of the travel industry and  state governments. But the proposals to exempt REAL-ID Act implementation and administration from the PRA and the APA appeared in neither state government nor industry wish lists for REAL-ID Act “modernization”. Presumably, these exemption provisions came from behind-the-scenes lobbying of Senate HSGAC leaders by the DHS.

The APA requires public notice (through the Federal Register), an opportunity for the public to comment, and an obligation for the agency to consider and respond to those comments before new Federal regulations binding on the public are put into effect. The PRA requires similar public notice and comment, and review and approval by the Office of Management and Budget, before any Federal agency can require members of the public to respond to any written or verbal “collection of information”. These are basic due process, transparency, and oversight requirements. This is what democracy looks like at the level of Federal administrative procedure.

The proposed exemptions are highly unusual if not unprecedented. There’s a history of exemptions from the APA for certain specialized agencies and activities, but we aren’t aware of an APA exemption for a specific non-military  program or activity like the one proposed in S. 4133 for implementation and administration of the REAL-ID Act. The PRA exemptions we are aware of apply to temporary or special-purpose agencies, not to ongoing activities of permanent civilian Federal agencies.

From its creation, the DHS has largely ignored both the APA and the PRA. The agency was successfully sued for failing to provide the notice and comment required by the APA when it started requiring air travelers to go through virtual strip-search imaging machines. And its flagrant failure to comply with the PRA would give any traveler who fails or refuses to provide ID or answer other questions at a TSA checkpoint an absolute defense against any sanctions.

The PRA and the APA are the laws that would most likely provide the initial basis for litigation by individuals against imposition by the DHS of an ID requirement for air travel.

The clear intent of these exemption provisions of S. 4133 is to let the DHS off the hook of being required to consider and respond to our pending objections to its PRA notice, and to allow the DHS to impose a new ID requirement for air travel by fiat, without having to give the public a chance to comment on the proposal and without having to face APA litigation or have travelers without ID invoke the PRA in their defense. This wouldn’t make what the DHS wants to do legal, but could make it much harder to challenge.

This is not the time to give the DHS more discretion to impose new obligations on the public with less oversight or due process. Congress should reject the proposed exemptions from the PRA and APA for REAL-ID Act implementation and administration.