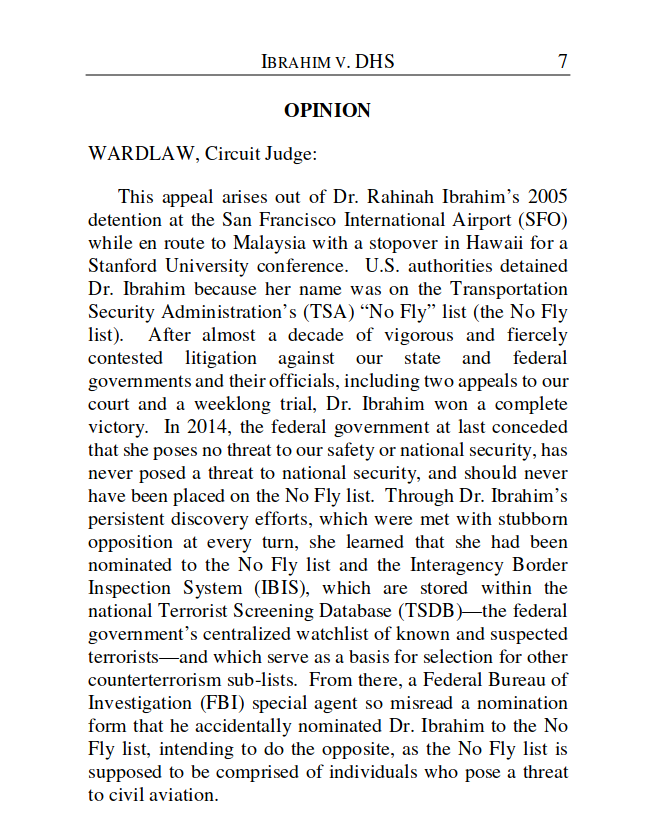 Fourteen years to the day after she discovered she was on the no-fly list when she was arrested at SFO, and five years after her legal victory in the first trial of a challenge to a government no-fly order (a Pyrrhic victory as she has still been denied a visa to return to the US), Dr. Rahinah Ibrahim won a third decision in her favor in the same case in 9th Circuit  Court of Appeals yesterday, this time en banc and on the issue of reimbursement by the government of Dr. Ibrahim’s attorneys’ fees and costs.

Trial judge William Alsup of the US District Court for the Northern District of California in San Francisco ruled that Dr. Ibrahim had been wrongly placed on the US government’s no-fly list. That slur against her was broadcast to other US government agencies, foreign governments, and airlines around the world, and resulted in the denial of Dr. Ibrahim’s right to travel, her false arrest at SFO, and other adverse actions.

That wasn’t a difficult decision to reach, once the facts were before the court. The government admitted that Dr. Ibrahim’s name had initially been placed on the no-fly list because an FBI agent on the mosque-watching detail had misunderstood how to fill out the blacklist (“watchlist“) nomination form.

But despite having known this for years, government lawyers only admitted it on the verge of the trial, after carrying out what the latest 9th Circuit decision describes as “scorched earth litigation”.

Even Attorney General Eric Holder got involved in the government’s obstruction of discovery in the case, signing what appears to have been a perjured affidavit falsely claiming that he had personal knowledge that disclosing the status or reasons for Dr. Ibrahim’s blacklisting (i.e. the fact that an FBI agent had made a mistake), “could reasonably be expected to cause significant harm to the national security.”

Following the District Court’s resolution of the case in Dr. Ibrahim’s favor (again, in a legal sense only, since the government defendants found other ways to continue to keep her out of the US), her lawyers filed what should have been a routine motion for recovery from the government of fees and costs they calculated at $3.9 million.

Despite Dr. Ibrahim’s argument that government lawyers’ bad faith in defending the blacklisting decision for years after they knew it was all a mistake justified full recovery of legal fees and costs, Judge Alsup drastically reduced the requested fee award. On appeal, a three-judge 9th Circuit panel upheld Judge Alsup’s decision to cut the award by 88 percent, from $3,923,917.60 to $454,756.07.

After rehearing the case en banc, a larger panel of the 9th Circuit reversed the original 3-judge panel and found that Judge Alsup had applied the wrong standard and abused his discretion in finding that the government hadn’t acted in bad faith and that Dr. Ibrahim was only entitled to recover fees for the specific arguments that were ultimately successful, despite having won an overall victory.

With respect to bad faith, the latest en banc opinion notes that:

[T]he government played discovery games, made false representations to the court, misused the court’s time, and interfered with the public’s right of access to trial. Thus, the government attorneys’ actual conduct during this litigation was ethically questionable and not substantially justified.

The en banc decision remands the case to Judge Alsup to recalculate the fee award, but makes clear that it should be closer to the originally requested $3.9 million than to the less than half a million dollars originally approved:

When the district court recalculates these fees, the calculation should acknowledge that Dr. Ibrahim and her lawyers, facing overwhelming odds, won a groundbreaking victory, and that they are entitled to the fees they’ve earned and the vast majority of fees they requested….

We therefore REVERSE, VACATE the award of attorneys’ fees, and REMAND to allow the district court to make a bad faith determination under the correct legal standard in the first instance, and to re-determine the fee award in accordance with this opinion.

We again congratulate Dr. Ibrahim and her lawyers, while continuing to denounce the US government’s decision — for reasons that remain secret, as noted in the latest 9th Circuit opinion — to continue to bar her from the US  despite admitting that there is no evidence that she has broken any law or poses any danger.