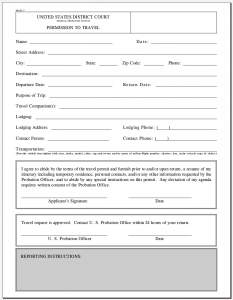 [Federal Probation System Form PROB-37, “Permission To Travel”. Note that even as used for probationers, this form is illegal: It lacks the required OMB approval, OMB control number, and Paperwork Reduction Act notice.]

Have all travelers become convicted criminals subject to court supervision, who have to apply in advance for permission from the government every time they want to travel?

And does the US government have extraterritorial jurisdiction over travel worldwide?

Apparently so, at least in the eyes of the Department of Homeland Security.

The NVC was established pursuant to President Trump’s February 2018 executive order NSPM-9. The “vetting” in the name is what President Trump has referred to as “extreme vetting” of immigrants and non-US citizens visiting or transiting the US. The first use of the NVC will be to “vet” citizens of countries in the US Visa Waiver Program applying for ESTA permits (online visas) to travel to the US.

The NVC is an inter-departmental body coordinated by a DHS component, US Customs and Border Protection (CBP), and this week the DHS has published a Privacy Impact Assessment (PIA) and released a redacted version of the  Implementation Plan for the NVC.

Here’s how the DHS describes the purpose and role of the NVC:

As even this summary self-description shows, the NVC is founded on a fundamental disregard for human and Constitutional rights.

First, there’s the mention of “travel to” the US (along with entry to the US) as a subject over which the US has jurisdiction. Such a claim should be denounced by other countries as a baseless US claim to extraterritorial jurisdiction and an invasion of foreign sovereignty

The assertion by the US of extraterritorial jurisdiction over movement toward the US border but not yet within the US, at any point even an inch beyond the border or any moment before arrival at a port of entry, is intended and is likely to succeed in frustrating the ability of legitimate refugees to exercise their right to seek asylum in the US.

Second, the DHS description of the NVC refers to travel as “travel-related benefits”. But travel is a Constitutional and human right, not a benefit or boon bestowed by the government.

The PIA says that the U.S. Government “determines whether to permit individuals to travel to…  the United States.” While that’s a true description, it’s a description of an illegal practice. Individuals don’t need a government permit or permission to exercise our rights.

As with other DHS programs for surveillance and control of individuals’ movements, there’s no recognition by the DHS that travel is a right or that the legality of restrictions on travel is subject to the more stringent substantive and procedural standards applicable to restrictions on rights.

If you haven’t heard of the NVC, that’s not surprising. In order to insure that the NVC can never be held accountable, the NVC will never interact directly with members of the public, won’t be considered to “own” any of the data on which it bases its actions, and won’t be considered to be responsible for any decisions about “benefits” such as travel.

The NVC will merely lurk in the background, invisible but holding power over individuals’ lives, like the divisions of the former East German Stasi or the current Chinese Public Security Bureau that other agencies of the government consult before making decisions about individuals.

According to the Implementation Plan, “The NVC will be physically located inside CBP’s NTC [National Targeting Center] facility in Sterling, Virginia, in a Secure Compartmented Information Facility (SCIF).”

“Vetting Analysts” at the NVC will make “recommendations” to DHS components, and other departments such as the Department of State, based on data aggregated by the NVC but still considered to be “owned” by other agencies.

Other agencies that supply data to the NVC and act on its “recommendations” will be considered to be the owners of the data and to be responsible for the decisions. No redress procedure will be created for NVC recommendations, and the DHS will, undoubtedly, resist any attempt to challenge these recommendations in court on the  grounds that they are non-binding recommendations

It’s hard to imagine another agency or department disregarding a recommendation from the NVC to take action against an individual. And an individual will have no way to know which entity provided, and is considered responsible for, the data forming the basis for an NVC recommendation.

Ironically, the PIA describing the NVC was published the same day that Vladimir Putin was confirmed to have been a card-carrying Stasi agent. We hope the day comes, and comes soon, when working for the DHS divisions that control who is allowed to exercise their right to travel becomes just as discrediting as having worked for the Stasi deciding which East Germans were allowed to visit their families and friends in the West.

One thought on “The Department of “Mother, May I?””