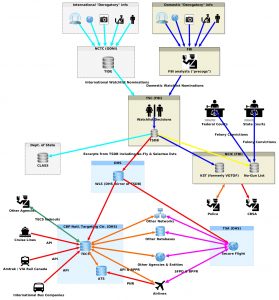 Congress  is again debating the proposals we wrote about last year to deny firearms licenses or permits to anyone “suspected of supporting” terrorism.

We stand by our earlier analysis and our condemnation of this proposal as (1) another step from sanctions against criminal conduct to pre-crime predictive policing, and (2) an expansion of the collateral consequences of secret, unconstitutional, extra-judicial, administrative blacklisting decisions.

But there seems to be a lot of confusion about what is really being proposed. This diagram shows what is already happening with the “No-Fly” and “No-Gun” lists, and what it would mean to merge them.

The proposed “No-Fly, No Buy” law currently under debate in Congress would add the TSDB as a third source (yellow arrow at center right of flow chart) of entries in “No-Gun” list in NCIC, in addition to Federal and state felony convictions and certain misdemeanor crimes of domestic violence. Everything else on this diagram except the one yellow line already exists and would remain the same.

Click the image above for a larger version, or click here for a full-page PDF of the flow chart with a key to all the acronyms.