A redacted version of the report of an internal review by the DHS Office of the Inspector General (OIG) of DHS implementation of President Trump’s January 2017 “Muslim Ban” Executive Order has been made public several months after the report was prepared.

Both the manner in which the OIG report was eventually released and the contents of the report are worthy of note, as discussed below.

Federal law requires every Cabinet-level Federal department, including the DHS, to have  an Inspector General. The DHS Inspector General is part of the DHS, but is appointed by the President, operates with considerable autonomy, and comes closer to the role of an “independent counsel” than does any other officer or office within the DHS.

The existence of the OIG report on DHS actions under the first “Muslim Ban” Executive Order (EO) was revealed in a November 2017 letter to Congress from IG John Roth. In this letter, IG Roth said that his office had delivered a draft of the Muslim Ban EO report to DHS “leadership” (presumably meaning the office of the Secretary of Homeland Security) in early October 2017, but that DHS leadership was taking an unusually long time to approve release of the report and had requested unusually extensive redactions. Days later, Roth took early retirement.

OTG and POGO are continuing to appeal the redactions, but even the expurgated version of the report is a damning indictment of DHS operational divisions, particularly US Customs and Border Protection (CBP), for illegal defiance of Federal court orders.

In our analysis of the Muslim Ban Executive Orders, we focused on DHS efforts to induce airlines to (illegally) deny boarding at foreign airports to blacklisted individuals and citizens of blacklisted countries, preventing refugees from reaching the US and thus preventing them from even applying for asylum.

We are struck that the OIG report assessing the legality of DHS actions focused on exactly the same issue we had highlighted: DHS efforts to induce airlines not to board citizens of the countries subject to the Muslim Ban EO on flights to the US from foreign airports, even after Federal courts in Boston and later elsewhere in the US had enjoined DHS to admit these people to the US.

The OIG concluded that, “It is our considered view that the issuance of no-board instructions violated the Louhghalam and Mohammed [U.S. District Court] orders.”

The OIG report includes examples such as the following:

In a complaint filed in federal court on Wednesday, February 1 [2017], the traveler described her situation. On Saturday, January 28 and Tuesday, January 31, she was denied boarding for two different Boston-bound flights based on two no board instructions from CBP. During her second failed attempt, which was after the Louhghalam [U.S. District Court case in Boston] order had issued, a Swiss Air representative told her that CBP had recommended that she not be permitted to board the flight to Boston. According to the [traveler], she had a copy of the order, which she showed to the agent, but the agent advised that Swiss Air had to comply with CBP’s “no board” instruction. Separately, Swiss Air’s legal department informed the traveler’s attorney that CBP had warned the airline of “the potential for fines up to $50,000 and refusal of permission for the flight to land.” The no board instruction itself also contradicted the intent of the Louhghalam order: it stated that “[t ]he individual will likely be deemed inadmissible upon arrival at a U.S. airport or preclearance location …” as shown below: 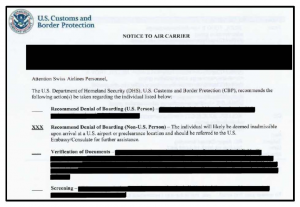 In fact, had this traveler reached the U.S., under the Louhghalam and Darweesh [court] orders, she would have been processed for a national interest waiver and almost certainly admitted.

Around the same time… CBP was issuing “no board” instructions to prevent another 20 EO [Executive Order]-affected travelers from boarding two Lufthansa flights from Zurich to Boston…. But Lufthansa had other ideas. On Friday February 3, CBP learned that Lufthansa rejected its “no board” instructions for 20 travelers on the two Boston-bound flights. The travelers were IV [immigrant visa] and NIV [nonimmigrant visa] holders for whom NTC [CBP National Targeting Center] checks did not identify any derogatory information. CBP confirmed that its Immigration Advisory Program team lead, a Supervisory CBPO stationed in Frankfurt, personally delivered the “no board” instruction “to the Lufthansa flight manager at the departure gate” of flight 422, which was scheduled to arrive at Logan at 1:10 p.m. on Friday.

Lufthansa corporate security acknowledged the recommendation, but boarded the passengers anyway, based on guidance from Lufthansa’s legal department. Because of pending litigation, Lufthansa took the position that it would accept nationals from the seven EO-covered countries who possessed valid visas on the Boston-bound flight until February 5 (the date the Louhghalam order was set to expire). CBP was not pleased with Lufthansa’s actions. [3 lines of text redacted by the DHS.] In the end, CBP granted waivers [allowing entry to the US] for all 20 EO-affected passengers whom Lufthansa had boarded over CBP’s objections.

Here what we think are the most significant takeaways from this report:

As we’ve pointed out in our analysis of the Muslim Ban and our submissions to the UN Office of the High Commissioner for Human Rights, denial of common-carrier transportation can have fatal consequences for asylum seekers and other refugees.

If, as the GAO says, “air carriers make the ultimate decision whether to deny boarding or to transport the individual to the United States,” travelers and public interest litigators need to hold airlines accountable for those decisions, and for the fulfillment of their duties as common carriers.

Travelers should insist that all airlines, every day, do as Lufthansa did on February 3, 2017. Airlines should put their legal obligations as common carriers ahead of nonbinding “requests” from US authorities to violate refugees’ or other travelers’ rights to freedom of movement.

If airlines refuse to do their job of transporting all would-be passengers to the US in accordance with their tariffs, travelers and public interest litigators should hold them accountable in the courts of the jurisdictions in which would-be passengers are denied boarding, in which those airlines are incorporated, and in the US.

Legal workers in the US and abroad concerned about preventing violations of immigrants’ and other travelers’ rights should prepare for, and advertise their availability to carry out, such litigation.

Kudos to Lufthansa for doing its job. Coals to the DHS for trying to pressure airlines to ignore their duty to the public and to violate the rights of travelers.

4 thoughts on “Kudos to Lufthansa. Coals to the DHS.”